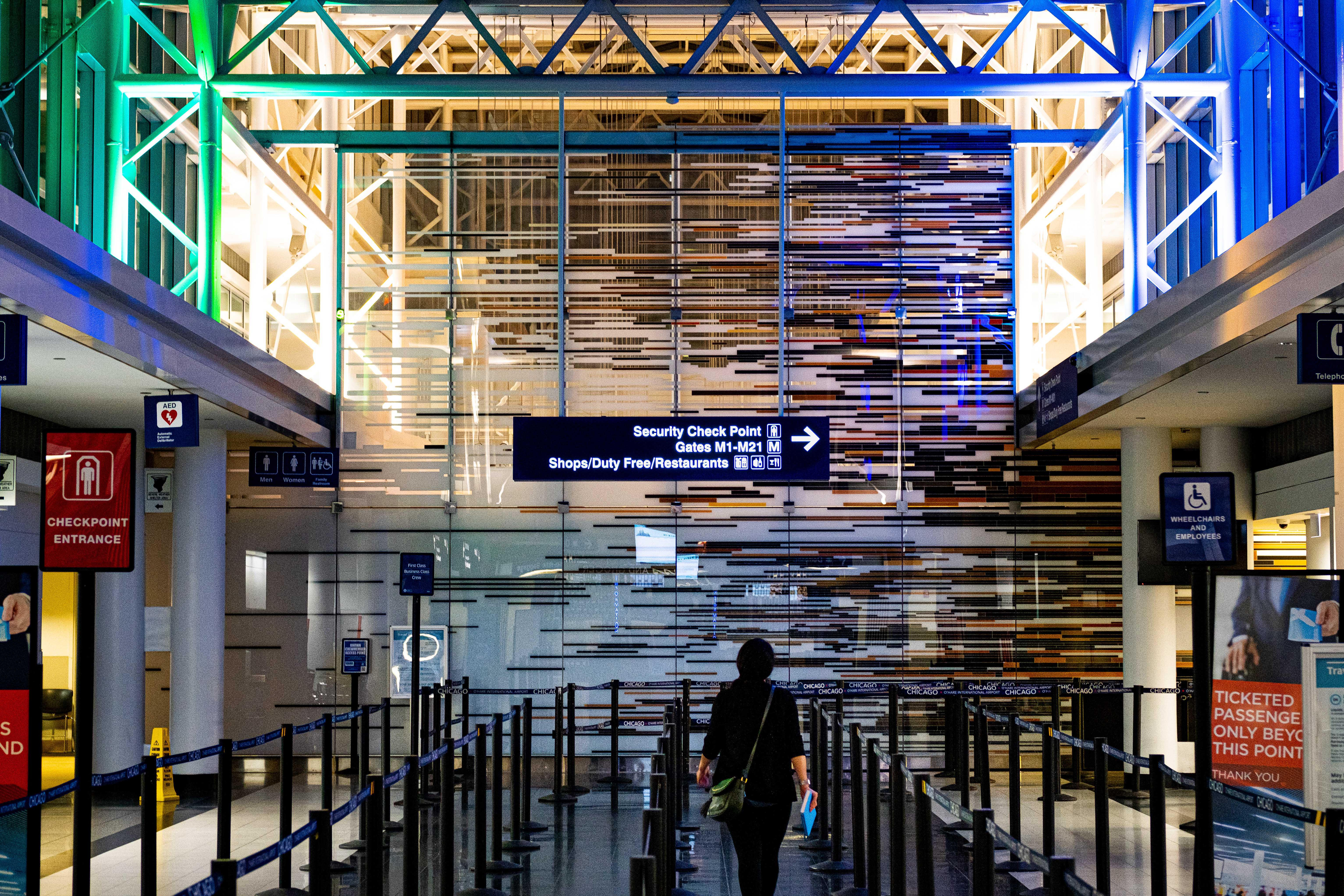 Aviation program management and project controls are the nerve center of airport expansions. For two decades, McKissack’s aviation expertise has helped major U.S. airports get the job done on time and on budget.
Download PDF

Given the scheduling issues involved, project controls are the nerve center of these aviation makeovers. Project controls teams organize this hive of activity, estimate its costs, set the projects’ sequence, head off delays and cost overruns and monitor contractor performance. For the past two decades, McKissack’s aviation program and project management expertise has helped cities and airlines get massive airport expansion programs off the ground and keep them aloft.

It’s still an open question how much of this work will slow down or scale back; air cargo demand has been volatile and passenger checkpoints are still far short of normal volume. Cities may need to delay capital plans as their financial capacity is tested in the financial recovery. Even so,the need to upgrade the country’s aviation infrastructure will resurface quickly and aviation project controls will be more necessary to get right than ever before in light of new fiscal—and physical—constraints we will all face in the coming years.

Our experience tells us that airport renovations are complex projects, and meticulously executed,precise aviation project controls will remain indispensable for project success,whatever their future form. Here are three reasons why.

O’Hare is now gearing up for an $8.5 billion expansion that will involve an array of project management and construction management initiatives to raze,build and extend terminals in the busy Midwestern aviation hub. In Washington, Reagan National is in the thick of its $1 billion Project Journey to redevelop two terminals,with new security checkpoints and a three-level concourse. At LAX, we worked on a $1.9 billion terminal revamp for Delta Air Lines, the departure point for $14 billion in airfield, facility and access projects.

Experience with large capital improvements and complex projects in other industries gave us the runway to pursue aviation projects. In 2005, when the O’Hare Modernization Program was cleared for takeoff, project controls and program management were critical in rethinking Chicago’s intersecting runways. Federal Aviation Administration oversight brought rigor to the selection process and openings for diverse teams that could bring big plans to completion.

Small and even mid-sized AEC firms are often at a disadvantage in winning construction management and project controls contracts, but McKissack was successful in joining four big teams vying for the O’Hare International makeover. The global AECOM aviation practice, although not one of Chicago’s go-to operators, was the unexpected winning bidder and brought us in—at first, to manage public-facing “land-side” improvements.

What started as a six-person project management office grew steadily as Marilyn White, John Sibenaller and other McKissack project managers were called on to procure the documents, agreements and permits needed for a new runway, a control tower, utility infrastructure, freight and cargo relocations and other improvements.

McKissack’s aviation practice really took off five years ago when the Metropolitan Washington Airports Authority broke from tradition and looked for new talent. We won a direct contract with the MWAA to perform project controls at Dulles and Reagan National using aviation best practices, work that brought us into play as a trusted partner with airport authorities nationwide.

At about the same time, we were supporting Delta in its seven-year program to relocate gates and access the new Tom Bradley International Terminal; providing document control and construction support in the phased build-out of a new LAX central utility plant; and working with the regional transit agency in planning the Crenshaw-LAX transit line, which is scheduled for 2021 completion.

The biggest challenge in aviation project controls and project engineering is that activity on both sides of flight check-in must run at full speed. It’s a particular challenge in the close confines of Reagan National, where steel framing is rising above the arrivals roadway for two new security checkpoints set to open in 2021.

Thanks to its size and scope, modernizing O’Hare is an especially complex and protracted project and shows how program management keep projects airborne. We’ve been working O’Hare for more than a decade to reconfigure, streamline and update runways to improve air traffic and safety.

Construction finally started in 2019 on the last runway extension in this long process designed to speed more passengers to their destinations.  But airfield expansion, which will continue into 2021, was just the beginning. O’Hare’s comprehensive program for improvements and expansion—O’Hare 21—is a multi-phase, multidimensional effort that will clear the path to build an array of new facilities, including architect Jeanne Gang’s architecturally groundbreaking Global Terminal on the site of an aging domestic terminal. McKissack is now on two of the three teams that will share in choreographing this impeding dance of construction activity.

The new terminal is scheduled to open in 2028, but first, the existing international terminal must expand as a new home for smaller carriers. Already one of the world’s biggest international facilities, O’Hare’s overall terminal square footage will grow more than 60% from 5.5 to 8.9 million square feet. Two satellite concourses will connect to the Global Terminal via underground walkways.

Like everything else surrounding COVID-19, there’s uncertainty about what will emerge in aviation. Will commuter traffic return? How quickly will airlines recover, and how will airport infrastructure figure in the recovery? Planners are always looking at multiple scenarios, and the most likely ones show the need to prepare airports for future growth. Whatever form that takes, airports will need program managers to stay the course.

Related Project
Media Downloads
Download Article
Watch Video
Related Articles
5 Challenges AEC Firms Face Post Pandemic to Improve K-12 School Buildings
Whether a K-12 school building is a legacy structure or built anew, making it healthy, safe, connected and resilient requires new PMCM strategies. Part Two of a Two-blog Series.
5 Critical K-12 School Infrastructure Upgrades Districts Need to Consider Now
Education is the pathway to equity; it begins with safe, healthy K-12 school buildings. Part One of a Two-blog Series.
Job Fulfillment and Company Culture Starts with Our Leadership Team
Assessing our company culture and playing to our employee’s strengths to increase job fulfillment led McKissack to reorganize its leadership team.
Changing Places: Reinventing Washington, D.C. With AEC
For 30 years, McKissack & McKissack has helped reinvent the landscape of Washington, D.C. with its work on historic landmarks, K-12 schools and public works.
Powering Communities: Building Next-Gen Infrastructure
Completing new electricity substation projects on time and on budget is a challenge when new power transmission lines must cross under highways and waterways.
Construction Management Helps Aviation Industry Chart New Course
As COVID-19 puts the brakes on travel, construction management firms in the aviation industry face changing priorities as they build airport cities. Planning is key to maximizing recovery.
McKissack Construction Management Protects K-12 Students & School Funds
As students go back to school under COVID-19, construction management in k-12 school projects plays a critical role in lowering the risk for students, teachers and families.
Reopening Offices Right: A COVID-19 Commercial Interior Design Playbook
Architects and commercial interior designers can help companies do thorough COVID-19 hazard assessments and give decision-makers workable options for returning to work.
Landmark Places Are Special Spaces. Here’s What Preserving Them Takes
Looking to the future keeps landmark construction on a historic path. McKissack’s landmark construction practice helps keeps public spaces true to the past and sustainable for the future.
3 Ways Airports Keep Expansion Plans Airborne Through COVID-19 Turbulence
Aviation program management and project controls are the nerve center of airport expansions. For two decades, McKissack’s aviation expertise has helped major U.S. airports get the job done on time and on budget.
McKissack Cares Pt. 3: Culture, a Circular Economy of Care & COVID 19
At AEC firm McKissack & McKissack, COVID 19 inspired an employee-first plan to weather the pandemic and build a stronger circular culture of care for the future.
McKissack Cares Pt. 2: Culture, a Circular Economy of Care & COVID 19
In response to COVID-19, AEC firm McKissack & McKissack embraced a circular economy of care that asks employees to be hungry, humble and smart to strengthen its corporate culture.
Building Communities Is Our Purpose. Floyd’s Death Is Our Challenge
McKissack’s purpose is to create spaces for communities to thrive. After George Floyd’s death that seems like a distant goal. But we need to own our role in this complex project.
McKissack Cares Pt. 1: Culture, a Circular Economy of Care & COVID 19
In our response to COVID-19, we’re becoming healthier, building resilience into our culture and caring for ourselves, each other, our clients, and our company.
What Job Candidates Need to Know to Choose Wisely
In the AEC industry’s competitive job market, McKissack has found new ways to attract the best talent to join a unique organization with transformative projects.
Tech That Kept Us Ahead of COVID-19 Will Jumpstart Smarter AEC Practices
Technologies that sustained architecture, engineering and construction management during the coronavirus crisis will make the AEC industry faster and more efficient in a COVID-19 recovery.
How to Return to Work? Project Controls Make the Unprecedented Possible
Project controls provide risk management expertise to clients, and their cost and scheduling discipline is the glue that holds the project together.
On the Job: What Construction Site Safety Takes During COVID-19
COVID-19 forces construction site safety innovation now and for the future. More stringent risk assessment procedures are keeping workers healthy.
Not Business as Usual in the AEC Industry
COVID-19 will change the course of workplace design and spark new AEC industry innovation as McKissack’s architects and construction managers make jobsites more effective and resilient.
A Moment of Gratitude
The current COVID-19 crisis has presented us with many challenges, but has also given us a chance to reflect and appreciate what we have in our lives: our families, our friends, our jobs, our communities.
How is COVID-19 Changing Design and Construction Management?
Despite the COVID-19 crisis, most construction projects are going forward. McKissack sees 5 immediate and significant changes that will shape the future of design and construction management.
Trust Matters More Than Ever—Even in the AEC Industry
Trust matters more than ever in a design and construction services industry dealing with crisis conditions; these 5 building blocks can foster teamwide trust.
COVID-19: To our team members, partners, stakeholders, friends and families:
We are living through a challenging time—one we will undoubtedly tell our unborn children and grandchildren about in coming years.
The Smithsonian’s Switch to Construction Manager-at-Risk Delivery
Working with the Smithonsian Institution, McKissack helped the National Museum of African American History and Culture development team switch from the classic design-bid-build approach to a construction manager-at-risk delivery.
Risk Management
Written by McKissack's Stephen D. Lisse, PE, DC Clean Rivers (DCCR) Project Commercial Manager, this paper describes the step by step approach used in the DCCR Project to manage risk at different stages of the project (preliminary design, procurement and contract award, and construction/startup).
Tracking and Reporting
At O’Hare International Airport (ORD), tracking and reporting funding to the various profiles—Airport Improvement Program Grant, Passenger Facility Charges, and General Airport Revenue Bonds—and third-party financing was critical on a monthly basis.
Risk Management
At O’Hare International Airport (ORD), our project controls team identified and tracked potential risks from project conception through construction and helped negotiate solutions that supported the best interest of the airport.
DISCOVER