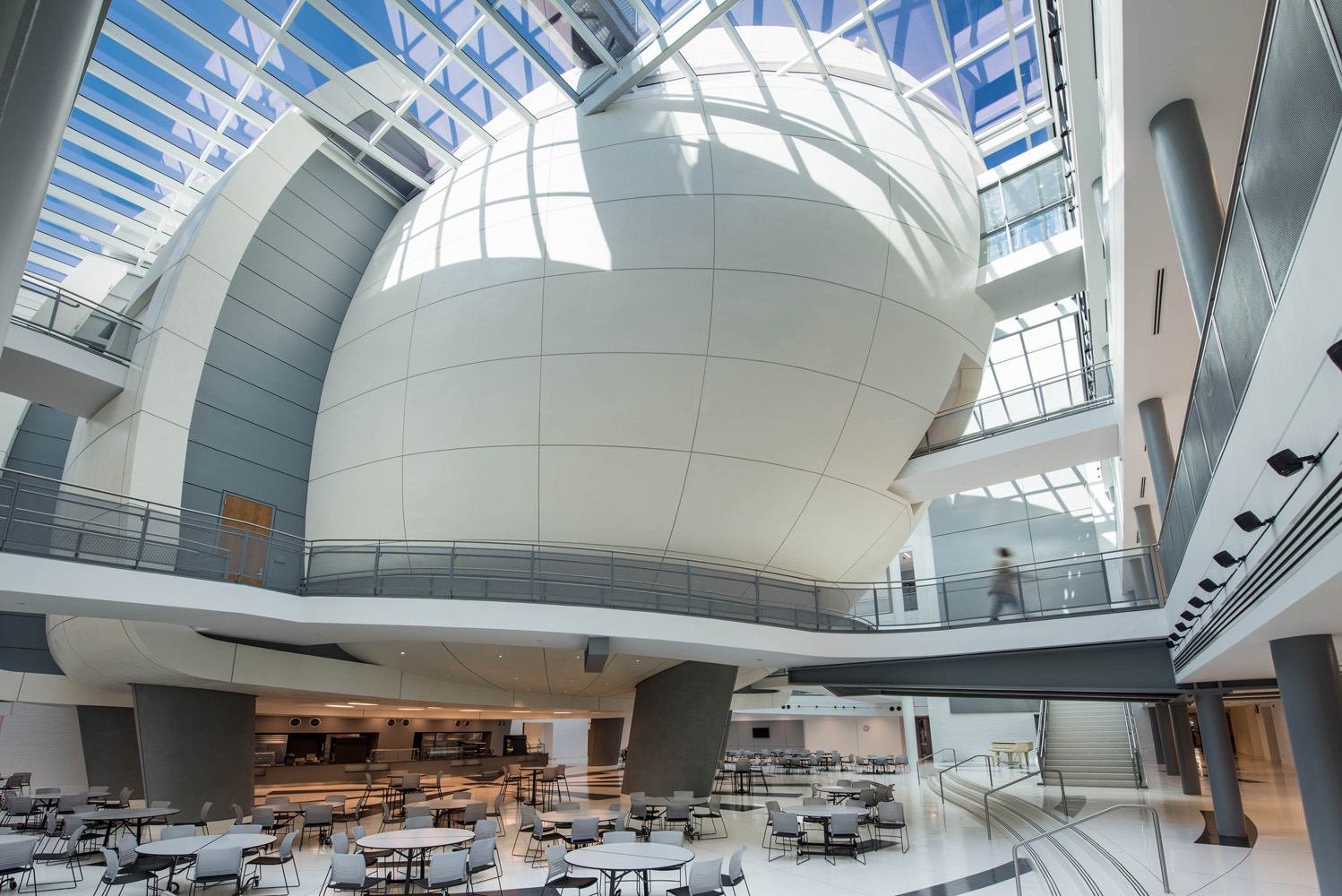 For 30 years, McKissack & McKissack has helped reinvent the landscape of Washington, D.C. with its work on historic landmarks, K-12 schools and public works.
Download PDF

Washington, D.C. isn’t the same city it was 30 years ago when I founded McKissack & McKissack here with just $1,000 in savings and a list of 300 names to cold call. At the time, D.C. was losing residents—a trend that hit rockbottom around 2000. Then the city’s population began growing again for the first time in more than 50 years—and we’re honored to say we’ve had a significant role in that growth.

Though we work on projects nationwide, our place in Washington’s architecture, engineering and construction (AEC) industry has a special resonance. This was, after all, the nation’s first predominantly Black major city. And the 1963 March on Washington, where Martin Luther King, Jr. delivered his now-iconic “I Have a Dream” speech, gave the National Mall deep symbolism as a place of reflection and inspiration for all Americans.

So in the 21st century, it was fulfilling for us—a Black- and woman-owned firm—to be the prime contractor on projects to preserve the Lincoln and Thomas Jefferson Memorials, relocate access roads and find permanent solutions to post-9/11 security challenges. Our three decades in the AEC industry are closely tied to Washington’s civic life, first with the nation’s historic landmarks and now with our local K-12 schools, colleges and business institutions.

As the official heart of our democracy, Washington, D.C. is full of urban planning challenges. After undergoing intense gentrification in the beginning of the 21st century, it had to change the way it planned its neighborhoods, educated its children and developed the infrastructure that held the city together. This meant creating new public spaces, revamping schools, investing in transportation and transforming entire parts of the city with new infrastructure and economic development. We’re proud to be able to say we have participated in all of these endeavors.

A tour of Ballou High School in the firm’s early years convinced me that McKissack had a bigger role to play in public works projects that could change people’s lives. Like many urban K-12 school districts, DC Public Schools had been short of funds for maintenance and repairs for years. A girls’ bathroom was dim and mirrors were cloudy; some sinks and toilets were ripped from the walls and partitions were down. This kind of neglect tells young women they are not valued. It told us that the AEC industry’s purpose, more than to renovate buildings, is to transform communities.

This revelation led us to pursue a role establishing the framework for, and managing,  D.C’s school revitalization program for more than a decade—a several billion dollar program. One of the most ambitious projects we worked on as part of that effort was the renovation and expansion of the historic landmark Duke Ellington School of the Arts. The district has about $200 million a year in its construction budget to stabilize, modernize or replace 123 buildings, as well as ballfields and other facilities.

Students need facilities that are both functional and inspiring. My college years at Howard University were my introduction not only to Washington but also to so much about the world outside my home town. So renovating the Tubman Quad’s dormitories and building new residence halls have been personally meaningful projects. McKissack was also the master planner for American University, identifying its needs for student housing, recreational space and a new Washington College of Law campus. In consolidating spaces at the University of the District of Columbia, planners could also give the campus a new identity and a focus for classroom and after-hours activity.

From Historic Landmarks to Historical Milestones

Preserving the Classical features of the Lincoln and Jefferson Memorials was a small step in our 30-year journey. A giant leap for myself and our firm was when we were able to use our program and construction management skills on the National Mall as we worked on the Smithsonian’s National Museum of African American History and Culture. Today it overlooks the Washington Monument and not only represents the Black experience but also helps make the Mall a place that truly represents America’s diversity.  We also honored the keynote speaker in that pivotal 1963 address as architect of record for the Martin Luther King, Jr. Memorial.

As proud as we are of our iconic public works, we’re also energized by the infrastructure and hospitality projects we’ve worked on that surround the seat of government. The six-block Walter E. Washington Convention Center, which involved tunneling under 9th Street and bridging L Street, was a breakthrough project in the late 1990s and early 2000s.  We returned there in 2011 to manage the demolition and explore redevelopment of the old convention center site, and in2018 to plan conference and office space. The convention center  set us on a series of complex design-build partner and prime contractor roles that required expertise in multiple AEC industry disciplines—and allowed us to encourage our clients to hire minority contractors to build their capacity and enable them to move them into key roles as they grew.

McKissack’s anniversary celebration in 2020 made us reflect on the essential role these public works projects playin as cultural and economic anchors. As we work remotely, we’re keenly aware of the unifying force of the building design and construction process, and the struggles that continue to consume the aviation and hospitality industries even as multiyear projects continue on track.

Many gathering places, like Nationals Park, have fallen quieter in the pandemic—although the baseball stadium still served as an early voting site. Today we can see our impact more broadly, not only in our work as lead partner in the stadium’s construction but in projects we’ve managed throughout the Navy Yard neighborhood, from the 11th Street bridges across the Anacostia River to new DC Plug power line and Blue Plains tunnel wastewater systems.

The Anacostia community’s rebirth as Capitol Riverfront has brought greater prosperity to the District, and it could not have happened without investments in power, transportation and water quality. We hope our roles in building MGM National Harbor, Audi Field, the U.S. Coast Guard Headquarters, Nationals Park and their surrounding infrastructure will spread that vibrancy throughout the region.

Today, as we look forward to an end to the pandemic and the new ways of working it will bring, we’re grateful to have managed public works and private construction projects that reflect our ambitions as citizens and our enterprise as residents. Our home city constantly inspires us, just as our 30 years of projects will provide reliable resources and constant revelations to our neighbors and visitors.

Related Project
Media Downloads
Download Article
Watch Video
Related Articles
5 Challenges AEC Firms Face Post Pandemic to Improve K-12 School Buildings
Whether a K-12 school building is a legacy structure or built anew, making it healthy, safe, connected and resilient requires new PMCM strategies. Part Two of a Two-blog Series.
5 Critical K-12 School Infrastructure Upgrades Districts Need to Consider Now
Education is the pathway to equity; it begins with safe, healthy K-12 school buildings. Part One of a Two-blog Series.
Why Are There So Few Women in the AEC Industry?
Women are vastly underrepresented in architecture, engineering and construction. Achieving gender diversity starts with acknowledging the AEC industry’s breadth of sexism.
Changing Places: Reinventing Washington, D.C. With AEC
For 30 years, McKissack & McKissack has helped reinvent the landscape of Washington, D.C. with its work on historic landmarks, K-12 schools and public works.
Powering Communities: Building Next-Gen Infrastructure
Completing new electricity substation projects on time and on budget is a challenge when new power transmission lines must cross under highways and waterways.
Design Thinking Generates Community Support for Power Substations
The power grid is undergoing a historic transformation that is giving architects and planners greater freedom to create more striking and compact power substations.
Construction Management Helps Aviation Industry Chart New Course
As COVID-19 puts the brakes on travel, construction management firms in the aviation industry face changing priorities as they build airport cities. Planning is key to maximizing recovery.
McKissack Construction Management Protects K-12 Students & School Funds
As students go back to school under COVID-19, construction management in k-12 school projects plays a critical role in lowering the risk for students, teachers and families.
Reopening Offices Right: A COVID-19 Commercial Interior Design Playbook
Architects and commercial interior designers can help companies do thorough COVID-19 hazard assessments and give decision-makers workable options for returning to work.
Landmark Places Are Special Spaces. Here’s What Preserving Them Takes
Looking to the future keeps landmark construction on a historic path. McKissack’s landmark construction practice helps keeps public spaces true to the past and sustainable for the future.
3 Ways Airports Keep Expansion Plans Airborne Through COVID-19 Turbulence
Aviation program management and project controls are the nerve center of airport expansions. For two decades, McKissack’s aviation expertise has helped major U.S. airports get the job done on time and on budget.
McKissack Cares Pt. 3: Culture, a Circular Economy of Care & COVID 19
At AEC firm McKissack & McKissack, COVID 19 inspired an employee-first plan to weather the pandemic and build a stronger circular culture of care for the future.
McKissack Cares Pt. 2: Culture, a Circular Economy of Care & COVID 19
In response to COVID-19, AEC firm McKissack & McKissack embraced a circular economy of care that asks employees to be hungry, humble and smart to strengthen its corporate culture.
Building Communities Is Our Purpose. Floyd’s Death Is Our Challenge
McKissack’s purpose is to create spaces for communities to thrive. After George Floyd’s death that seems like a distant goal. But we need to own our role in this complex project.
McKissack Cares Pt. 1: Culture, a Circular Economy of Care & COVID 19
In our response to COVID-19, we’re becoming healthier, building resilience into our culture and caring for ourselves, each other, our clients, and our company.
What Job Candidates Need to Know to Choose Wisely
In the AEC industry’s competitive job market, McKissack has found new ways to attract the best talent to join a unique organization with transformative projects.
Tech That Kept Us Ahead of COVID-19 Will Jumpstart Smarter AEC Practices
Technologies that sustained architecture, engineering and construction management during the coronavirus crisis will make the AEC industry faster and more efficient in a COVID-19 recovery.
How to Return to Work? Project Controls Make the Unprecedented Possible
Project controls provide risk management expertise to clients, and their cost and scheduling discipline is the glue that holds the project together.
On the Job: What Construction Site Safety Takes During COVID-19
COVID-19 forces construction site safety innovation now and for the future. More stringent risk assessment procedures are keeping workers healthy.
Not Business as Usual in the AEC Industry
COVID-19 will change the course of workplace design and spark new AEC industry innovation as McKissack’s architects and construction managers make jobsites more effective and resilient.
How is COVID-19 Changing Design and Construction Management?
Despite the COVID-19 crisis, most construction projects are going forward. McKissack sees 5 immediate and significant changes that will shape the future of design and construction management.
The Smithsonian’s Switch to Construction Manager-at-Risk Delivery
Working with the Smithonsian Institution, McKissack helped the National Museum of African American History and Culture development team switch from the classic design-bid-build approach to a construction manager-at-risk delivery.
Risk Management
Written by McKissack's Stephen D. Lisse, PE, DC Clean Rivers (DCCR) Project Commercial Manager, this paper describes the step by step approach used in the DCCR Project to manage risk at different stages of the project (preliminary design, procurement and contract award, and construction/startup).
Tracking and Reporting
At O’Hare International Airport (ORD), tracking and reporting funding to the various profiles—Airport Improvement Program Grant, Passenger Facility Charges, and General Airport Revenue Bonds—and third-party financing was critical on a monthly basis.
Risk Management
At O’Hare International Airport (ORD), our project controls team identified and tracked potential risks from project conception through construction and helped negotiate solutions that supported the best interest of the airport.
DISCOVER