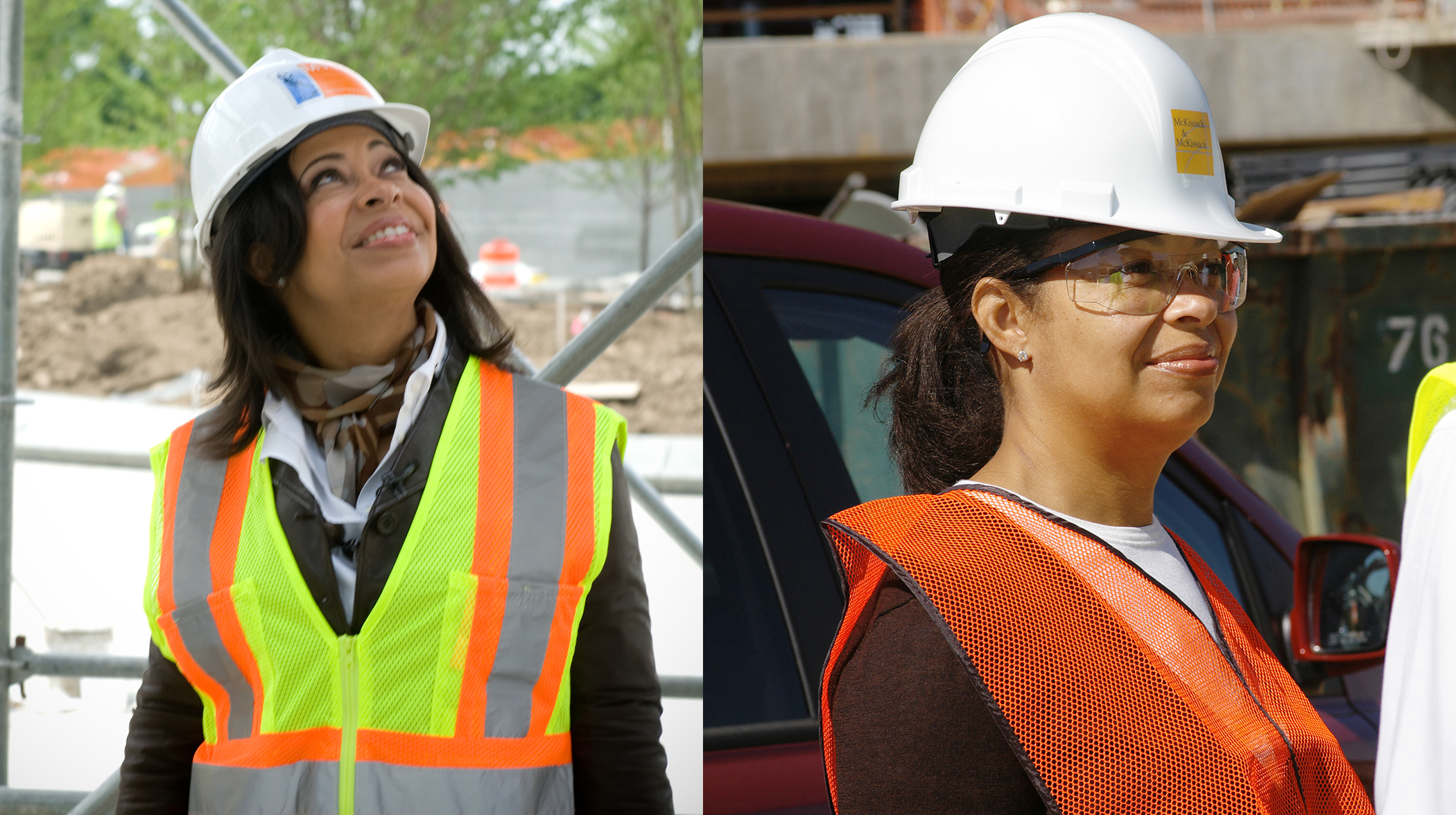 Why Are There So Few Women in the AEC Industry?

From facing Confederate flags at job sites to losing prime contracts to male-led firms, I’ve braved every kind of discrimination in the architecture, engineering and construction industry. But even though I’m a Black CEO, I’ve always felt that sexism has been far more difficult to overcome than racism in the AEC industry, the nation’s sixth-largest by employment. A recent Architectural Digest story shows other women in construction face the same challenges.

The numbers help explain why: Women are vastly underrepresented in the AEC workforce. While they made up 47% of the nation’s 2020 workforce, women constitute only 10.9% of construction industry workers, according to the U.S. Bureau of Labor Statistics. On the job site, they’re almost invisible; construction equipment network Big Rentz estimates that only 1.25% of employees in the field are women.

Architecture and engineering fare little better. While 27% of 2020 workers in this sector were women, per the BLS, studies and opinion pieces show many ultimately leave both fields. Inflexible hours, unprogressive office culture, lack of advancement and few mentorship opportunities contribute to the turnover. Architecture has the added burden of a culture of long hours and low pay.

Not surprisingly, women in construction also face significant hurdles, Big Rentz noted, from discrimination to exclusion to lower pay and slower advancement than their male counterparts. These very issues motivated me to found McKissack in 1990 after 10 years as a civil engineer and program manager with a shoestring budget of $1,000 and a cold call list of 300 contacts.

But since then, I’ve seen not only that women are in short supply on job sites, but they’re also treated in a condescending manner in many business situations. I’ve been excluded from business development opportunities and ignored in meetings. When I was married, bankers insisted that my husband co-sign on my business loans. When you’re excluded and discounted, and looked at only in a certain light ,it’s easy to feel disheartened and less confident.

Why We Need Women in the AEC Industry

Yet we desperately need women in the AEC industry for a number of reasons. The first is most obvious: As our industry becomes increasingly sophisticated, analytics focused and technologically savvy, it needs highly educated, skilled workers. Women earned about 57% of bachelor’s degrees in 2019, Pew Research estimated, and they represented represented 47% of the workforce in 2020. That means there are plenty of women the AEC industry can tap.

Second, the AEC industry is growing by leaps and bounds as we recover from the COVID-19 pandemic. Construction is No. 3 on are cent BLS short list of five industries driving the U.S. economy. It’s projected to flourish with population growth, a throttled demand for more housing and the need to upgrade aging infrastructure. You can’t build things without architects and engineers.

While finding highly educated, skilled workers is more important than ever, good talent is exceptionally hard to find in the AEC industry. The sector employed almost 11 million people in construction and another 1.8 million in architecture and engineering in 2020. Even before the pandemic, there were nearly 300,000 vacancies in the construction industry. A recent workforce survey by the Association of General Contractors shows the labor squeeze is getting tighter. In March 2021, New Engineer observed that a lack of skilled engineers in the talent pipeline is setting back infrastructure projects from airports and schools to hospitals and power systems.

Finally, diverse teams are not only more productive but also more profitable. Countless studies have proven this point. Most recently, McKinsey’s 2020 report showed gender-diverse companies are 25% more likely to achieve above-average profitability compared to less diverse organizations. Even better, that benefit becomes more profound when women are represented in executive leadership. A Boston Consulting Group study found that companies with more diverse management teams are more open to innovation, creativity and empathy, and their revenues are 19% higher to show for it.

Gender Diversity in AEC is a Survival Issue

As we marked Women’s History Month in March, I shared my experiences in AEC with several industry associations and some of our partners. The stories of women’s AEC milestones convinced me that we still have many a steep uphill battle. For instance, even though we have an outstanding performance record on our projects at McKissack, we still have to fight for a bigger piece of the proverbial pie. As a female CEO, I believe that comes down to unconscious sexism.

The solution? Of course, sexism is part of a bigger structural problem, not only in AEC but in every industry. Rev. Jesse Jackson famously said excellence is the best deterrent to racism or sexism, a mantra we live by every day at McKissack. But to get the AEC industry on sound footing, we need to work on gender diversity like any program management issue—by bringing everyone to the table, evaluating the facts, developing a plan and executing it.

Women make up more than half the population. They’re the source of workforce growth as current employees retire. We need their future participation if we hope to have the best talent possible, which means coming together as an industry to support STEM efforts, recruiting, mentoring and more. Since gender diversity makes such a difference in performance and profitability, imagine the kind of progress we can make when we strengthen gender diversity in the AEC industry.

Related Project
Media Downloads
Download Article
Watch Video
Related Articles
Effective DE+I Programs Come From Deep Within a Company’s Core Values
When leaders’ beliefs about diversity, equity and inclusion are communicated and reinforced, they shape employees’ perceptions, behaviors and understanding
Bringing DEI to the Capital: Next Up, Cultural Spaces for Women and Latinos
As our nation’s “front yard,” Washington, D.C. must reflect our populace. Yet DE&I have only been visible in its landmarks and cultural spaces, and the teams that build them, only recently.
Parity for Minorities on Boards is Still 52 Years Away. It’s Time to Get to Work
Women and minorities are profoundly underrepresented in the architecture, engineering, and construction industries. Focusing on the right priorities can help minority leaders build their businesses.
11 Priorities for AEC Minority Suppliers to Help Build Their Businesses
Women and minorities are profoundly underrepresented in the architecture, engineering, and construction industries. Focusing on the right priorities can help minority leaders build their businesses.
The AEC Industry Needs More Blacks; Higher Education is Key
Earning STEM degrees can help close the income and wealth gaps for Black workers; we all need to help this happen.
Why We Need A 7-Point Plan to Combat Racism and Discrimination in the AEC Industry
Achieving diversity, equity and inclusion and eliminating racism in the architecture, engineering and construction is critical for the future; here’s a 7-Point Plan to reach this goal.
Job Fulfillment and Company Culture Starts with Our Leadership Team
Assessing our company culture and playing to our employee’s strengths to increase job fulfillment led McKissack to reorganize its leadership team.
5 Ways COVID-19 Will Change Commercial Real Estate Design
As the pandemic wanes, lifestyle changes and new sustainability mandates will change commercial real estate design forever. Here’s what the AEC industry should know.
Working as an MWBE in Chicago’s AEC Industry
AEC industry MWBE McKissack & McKissack has a robust roster of significant Chicago projects, including the Obama Foundation, O’Hare International Airport, Navy Pier and more.
Why Are There So Few Women in the AEC Industry?
Women are vastly underrepresented in architecture, engineering and construction. Achieving gender diversity starts with acknowledging the AEC industry’s breadth of sexism.
Changing Places: Reinventing Washington, D.C. With AEC
For 30 years, McKissack & McKissack has helped reinvent the landscape of Washington, D.C. with its work on historic landmarks, K-12 schools and public works.
Powering Communities: Building Next-Gen Infrastructure
Completing new electricity substation projects on time and on budget is a challenge when new power transmission lines must cross under highways and waterways.
Design Thinking Generates Community Support for Power Substations
The power grid is undergoing a historic transformation that is giving architects and planners greater freedom to create more striking and compact power substations.
Construction Management Helps Aviation Industry Chart New Course
As COVID-19 puts the brakes on travel, construction management firms in the aviation industry face changing priorities as they build airport cities. Planning is key to maximizing recovery.
McKissack Construction Management Protects K-12 Students & School Funds
As students go back to school under COVID-19, construction management in k-12 school projects plays a critical role in lowering the risk for students, teachers and families.
Reopening Offices Right: A COVID-19 Commercial Interior Design Playbook
Architects and commercial interior designers can help companies do thorough COVID-19 hazard assessments and give decision-makers workable options for returning to work.
Landmark Places Are Special Spaces. Here’s What Preserving Them Takes
Looking to the future keeps landmark construction on a historic path. McKissack’s landmark construction practice helps keeps public spaces true to the past and sustainable for the future.
What Job Candidates Need to Know to Choose Wisely
In the AEC industry’s competitive job market, McKissack has found new ways to attract the best talent to join a unique organization with transformative projects.
Tech That Kept Us Ahead of COVID-19 Will Jumpstart Smarter AEC Practices
Technologies that sustained architecture, engineering and construction management during the coronavirus crisis will make the AEC industry faster and more efficient in a COVID-19 recovery.
How to Return to Work? Project Controls Make the Unprecedented Possible
Project controls provide risk management expertise to clients, and their cost and scheduling discipline is the glue that holds the project together.
On the Job: What Construction Site Safety Takes During COVID-19
COVID-19 forces construction site safety innovation now and for the future. More stringent risk assessment procedures are keeping workers healthy.
Not Business as Usual in the AEC Industry
COVID-19 will change the course of workplace design and spark new AEC industry innovation as McKissack’s architects and construction managers make jobsites more effective and resilient.
How is COVID-19 Changing Design and Construction Management?
Despite the COVID-19 crisis, most construction projects are going forward. McKissack sees 5 immediate and significant changes that will shape the future of design and construction management.
The Smithsonian’s Switch to Construction Manager-at-Risk Delivery
Working with the Smithonsian Institution, McKissack helped the National Museum of African American History and Culture development team switch from the classic design-bid-build approach to a construction manager-at-risk delivery.
Risk Management
Written by McKissack's Stephen D. Lisse, PE, DC Clean Rivers (DCCR) Project Commercial Manager, this paper describes the step by step approach used in the DCCR Project to manage risk at different stages of the project (preliminary design, procurement and contract award, and construction/startup).
Tracking and Reporting
At O’Hare International Airport (ORD), tracking and reporting funding to the various profiles—Airport Improvement Program Grant, Passenger Facility Charges, and General Airport Revenue Bonds—and third-party financing was critical on a monthly basis.
Risk Management
At O’Hare International Airport (ORD), our project controls team identified and tracked potential risks from project conception through construction and helped negotiate solutions that supported the best interest of the airport.
DISCOVER